What a packed day at the Santa Barbara LOL Comedy Festival!

First, the LOLflix crew showed up at my door to do a promotional short film for sponsors, The Eagle Inn and Uber. The synopsis: I’m trying to think of a song about Santa Barbara and hit the town to ask locals for inspiration.  I have a hard time adapting to beach culture, plus encounter some colorful characters along the way. It should be shortly and I’ll repost it here.

After I got cleaned up from sunscreen and sandstorm from the shoot, I headed over to the Lobero Theater to shoot a music video for my song “I Got Game,” which will be released in the coming months.  The song is an explosive hip-hop anthem in which I prove my game by rapping 44 game titles in two minutes.  It usually takes every ounce of my body to make it through the piece once in my live shows.  I did it about six times during the taping and was definitely feeling winded by the end!

Shortly after, Jay Mohr showed up to tape his special.  I’ve never seen someone so relaxed before shooting such a defining moment.  He walked into the theater a few minutes before showtime and banged out an amazingly hilarious hour like it just came off the top of his head.  One of the highlights for me was his spot-on Norm McDonald impression.  It may be even better than his renown Christopher Walken, which I often hear on his radio show, Mohr Sports.  Unfortunately, I didn’t get to talk to Jay after the show, I think people are going to love this special.

My friend Brad Williams was next, taping a his special, “Fun Size.”  In case you don’t know, Brad is a dwarf who has been really making a name for himself lately on shows like Mind of Mencia, his podcast, “About Last Night” with Adam Ray and most recently as a radio personality on KROQ in Los Angeles and Live 105 in San Francisco.  I’ve had the pleasure of watching Brad grow over the years (no pun intended) and knew this was a really important night he’d been working for his whole career.  I’m proud to say he absolutely DESTROYED!  Be onl the lookout , because I believe “Brad Williams Fun Size” will make him one of the top comedians in the country when it is released.

Here’s our interview just moments after the taping: 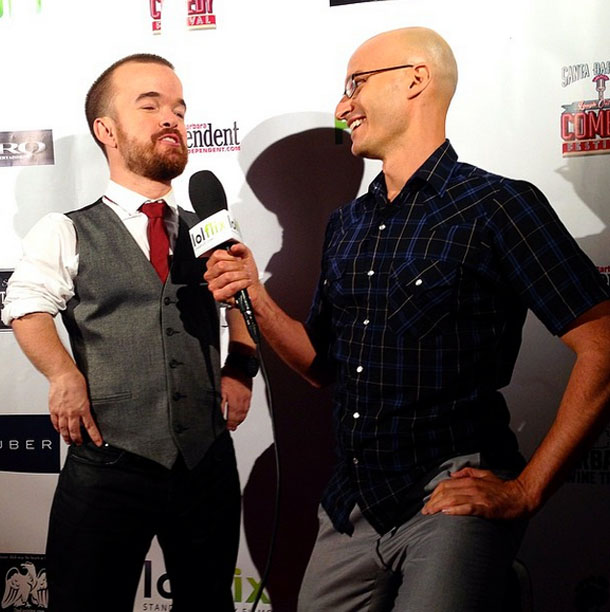