Who would’ve thought my culture-blending “Shalom Cabrón” shirt would cause so much controversy?  I sell this funny shirt at my comedy shows, based on my joke about mixing my Jewish and quarter-step Mexican heritages.  Fans will occasionally post pictures of themselves wearing my merch and it makes me feel like a big star with a clothing line.

It all started as an innocent repost of this cute girl modeling my shirt, with duck lips as a bonus. 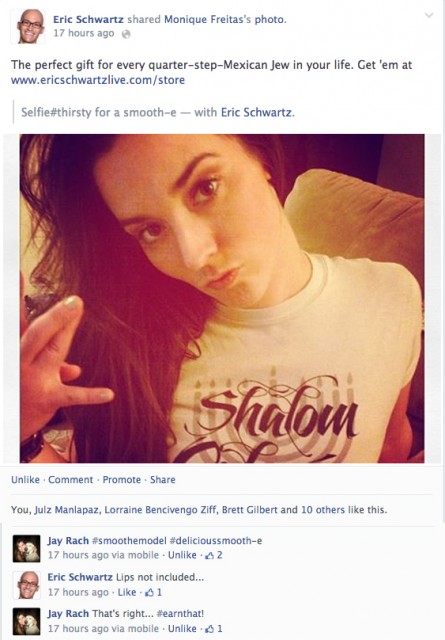 Then, instead of a silver t-shirt, someone saw a red flag.

Not to worry. The Mexican who originally taught me the word came to the rescue. My step-father, Jaime Valle, reassured Facebook that Mexicans often use the word in a friendly way.

No matter how hard we tried to stop it, the panic spread. 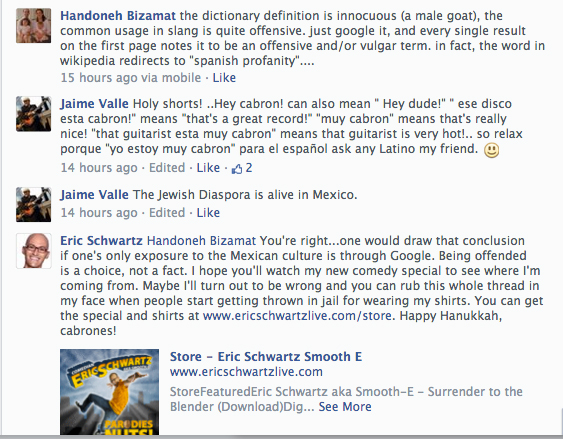 Things started to get out of hand.  Was I on the brink of a race war?  Seeing as it was the last night of Hanukkah, I decided to fan the flames on this Mexican menorah! 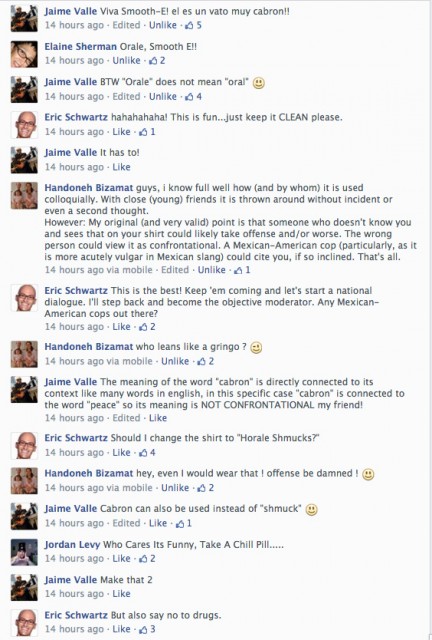 Finally, we were finding some understanding. I began to realize this was simply a Jewish mother who was concerned only for my well-being and not for diminishing the stereotype that Jewish mothers are neurotic.

The fans began to remember what this pic was really about.  Racial harmony.  And hot girls.

No, nobody remembers that the translated “Mitsubishi Masturbater” rubbed Latin Americans the wrong way. It became a collector’s item, so you may want to pick up a Shalom Cabrón tee before I have to change it to “Shalom Montero.”

*Wear at your own risk.