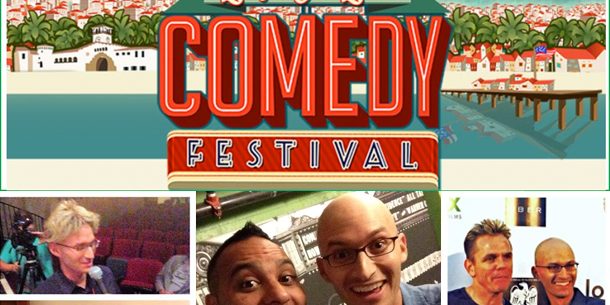 The Hot Funny Femmes were hilarious and got a standing ovation to prove it!  The list included Amy Anderson, Nadine Rajabi, Rachel Bradley, Monique Marvez, Jill Michele Melean, Jen Murphy, Kimmie Dee and Grace Fraga. One of the highlights was finding out Amy Anderson is the mother of Aubrey Anderson-Emmons, who plays Lily Tucker-Pritchett on Modern Family!  She talked about how her daughter earns more money than her during her set, and the crowd loved it.

Russell Peters packed the Granada Theater, one of Santa Barbara’s–and the country’s–most-beautiful venues.  Russell is currently the most famous comedian in the world, but you wouldn’t know it by talking to people in Santa Barbara.  Watch this:

I asked Russell for his take on the situation in this short interview.
http://www.hulu.com/watch/683366

But if you’ve ever seen Russell live, you know he can’t be kept secret for much longer.

See you tomorrow, where it’s funny and sunny at the Santa Barbara LOL Comedy Festival.